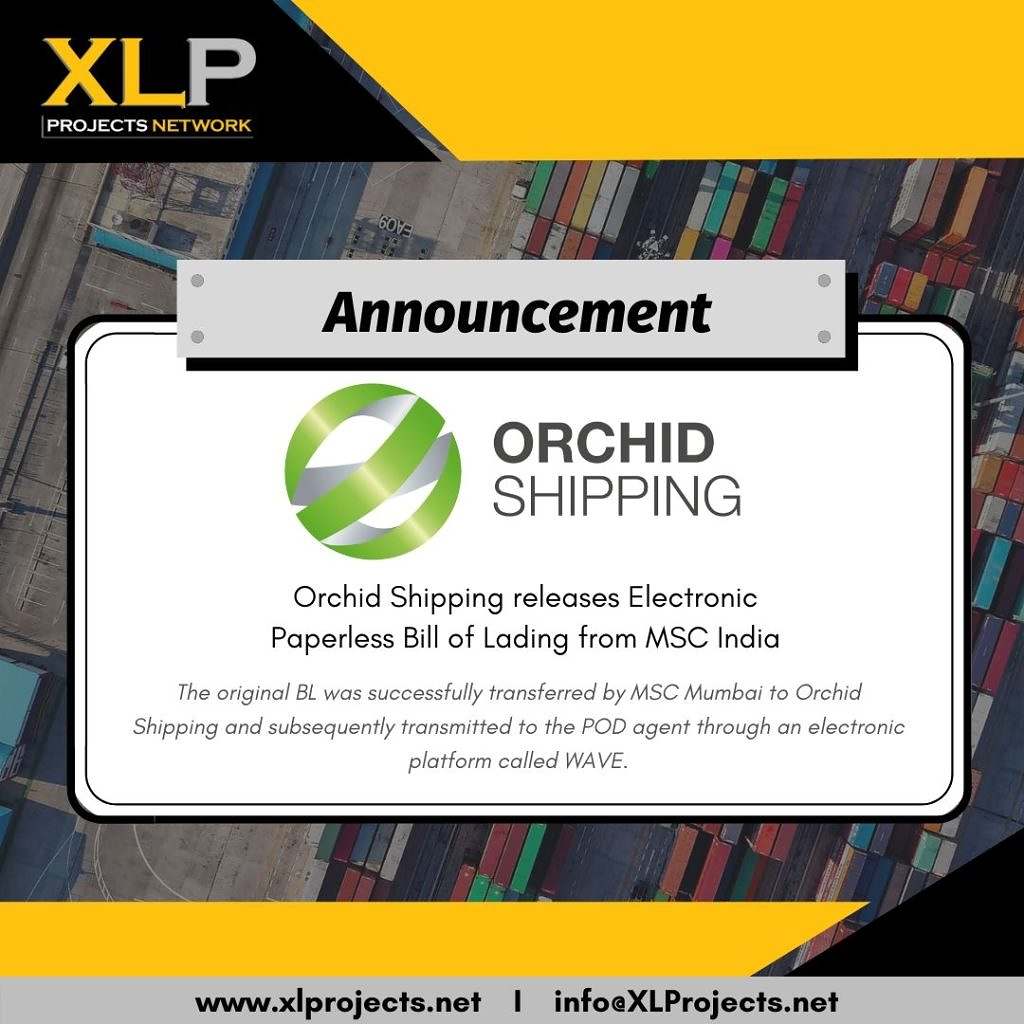 Orchid Shipping are pleased to announce that they are first company to release Electronic Paperless Bill of Lading from MSC India. The original BL was successfully transferred by MSC Mumbai to Orchid Shipping and subsequently transmitted to the POD agent through an electronic platform called WAVE. Orchid Shipping was able to save cost towards collection of BL from counter as well as courier cost to overseas agents.  The whole process took few minutes without any additional expenses.

Considering the present circumstances on account of COVID-19, the Indian Ports Association (IPA) under the aegis of the Ministry of Shipping has taken steps towards digitising some of trade related process and has managed to digitise the major part in port related activities including e-invoice, e-payment and electronic delivery order (e-DO).

The Bill of lading (BL), a critical component however was still amiss, wherein trade bodies under the umbrella of the Federation of Indian Logistics Association (FILA) had also supported the IPA initiative of eBL and identified providers like CargoX, Tradelens, WAVE, Bolero etc. explored for maritime EXIM cargo. In this regard, the Shipping Secretary also voiced that the ‘stakeholders of the trade industry’ such as carriers, exporters and importers can also be issued a mandate to adopt and use such platforms for ‘electronically generated trade documentation’ including the Bill of Lading (document of title) across stakeholders and across nations.

The Shipping Secretary has made a written representation to the Commerce Secretary stating the constraints posed in absence of service providers such as courier agencies, general lockdown restrictions, requirement of social distancing are causing severe impediment in issuance, delivery and despatch of physical format based trade documentation for EXIM containerized cargo.

The letter also has stated the involvement of departments such as the Indian Customs and to consider issuing suitable guidelines and advisory consistent with international conventions on the subject to all relevant Departments as well as to Indian Bank Association (IBA) for accepting ‘electronically generated trade documentation’.

“Eliminating paper from the shipping transaction will make every aspect of commercial container shipping better, faster, cheaper, more secure and environmentally friendly too”. As stated by the Digital Container Shipping Association (DCSA), which features the IT expertise of the world’s top liners, who are determined to consign the centuries-old bill of lading to history.

In an effort to fully understand the benefit of digitising the bill of lading, the DCSA also stated that several solution providers carried out financial modelling exercise to quantify the potential cost savings for switching from paper to electronic Bill of Lading, wherein the research showed the total cost of processing paper bills is almost three times that of electronic ones, which proves that there can be huge potential savings achieved with the adoption of e-BL.

“The transformation that has taken place in the airline industry is an example of what’s possible if we work together. The e-Air Waybill is now the norm rather than the exception among air carriers. We invite industry stakeholders to work with us to create standards that will make the e-BL maximally useful and relevant for ensuring their goods are delivered safely and seamlessly to their final destination.”

Smart bills of lading are now being pioneered by many companies across the world. The old fashioned paperwork has attracted much criticism in recent years. While Bills of Lading were described as something that have not changed much from the past times, it is time that we now take this opportunity and gain efficiencies of digitization.

WAVE, the E-Commerce solution to our customers for Electronic Bill of Lading  (“eB/L) issuance, transaction, exchange of other shipping documents and release of cargo at destination.

WAVE uses blockchain technology to connect all members of the supply chain to a decentralized network and to allow them a direct exchange of e-B/L and /or  other shipping documents like invoice, packing list, certificate of origin, etc. between the trading partners in the blockchain. WAVE is simple, easy to use, facilitates paperless transactions processing at incredibly high speeds and one can enroll without any IT knowledge or additional resources.